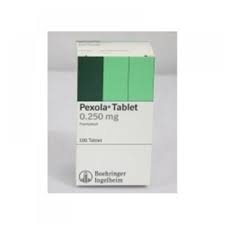 Pexola 0.25mg tablets contains Pramipexole 0.25mg, which treats Parkinson’s disease and restless leg syndrome. It works by increasing the action of dopamine, a chemical messenger that controls movement in the brain.

PEXOLA tablet treats signs and symptoms of idiopathic Parkinson’s disease in adults. One can use it alone in the course of the disease, when late effects of levodopa begin to decrease, or when the therapeutic effect fluctuates as the change becomes apparent.

Posology and method of administration

Posology/frequency and duration of administration:

PEXOLA ER is an oral release formulation of pramipexole once daily.

Suppose one misses a dose of PEXOLA 0.25mg tablets. Take it within 12 hours of the time that patients should take the amount. If more than 12 hours have passed, skip the missed dose and take it on the next day.

Sudden discontinuation of dopaminergic treatment may lead to the development of the neuroleptic malignant syndrome.

Swallow PEXOLA 0.25mg tablets whole with water, do not chew, break, or crush. In addition, one can take the tablets with or without food at the same time every day.

Elimination of pramipexole is dependent on renal function. Use the following dose scheme:

If the kidney function decreases during maintenance therapy, caregivers should use the above recommendations.

Since approximately 90% of the absorbed active substance excretes through the kidneys, dose adjustment in patients with a hepatic impairment will probably not be necessary. However, investigations on the potential effect of liver failure on PEXOLA pharmacokinetics are yet to happen.

The PEXOLA 0.25mg tablets have no use in the pediatric population in Parkinson’s disease.

Special warnings and precautions for the use of pexola 0.25mg tablets

It is a known side effect of dopamine agonists or levodopa therapy. Caregivers should warn patients that hallucinations (primarily visual) may occur.

Pramipexole was associated with drowsiness and sudden onset of falling asleep, especially in patients with Parkinson’s disease. Sudden onset of sleep seizures occurring during daily living activities and without any symptoms have are uncommon; this may happen in some cases without awareness or any stimulatory symptoms.

Caregivers should warn patients about this issue. In addition, they should be careful using this medicine, mainly operating vehicles and machines.

Patients who experience drowsiness or sudden sleep seizures should avoid using tools and machinery. It may also be an excellent option to reduce the dose or terminate the treatment. Due to possible additive effects, patients should be careful when taking other sedative drugs or alcohol when using a medication containing pramipexol.

Caregivers should monitor Patients regularly for the possibility of developing impulse control disorders.

Individuals interested in the Care and Treatment of patients should be made aware of the behavioral symptoms of impulse control disorders such as pathological gambling, increased libido, hypersexuality, compulsive spending or shopping, obstructive eating, and over-eating in patients treated with dopamine agonists, including PEXOLA.

If such symptoms develop, the dose should be reduced or stepped down in steps.

Treatment with dopamine agonists in patients with psychotic disorders should only happen if the potential benefit from treatment is higher than the potential risk. Patients should avoid the simultaneous use of pramipexole and antipsychotic drugs.

In case of regular or visual abnormalities, ophthalmological monitoring should take place.

Patients should take care in case of severe cardiovascular disease. Due to the risk of postural hypotension associated with dopaminergic therapy, it is recommended to monitor blood pressure, especially at the beginning of treatment.

Some patients have reported residues in their feces that resemble intact PEXOLA ER tablets. If the patient reports such an observation, the doctor should re-evaluate the patient’s response to treatment.

PEXOLA 0.25mg tablets should not be used unless explicitly necessary during pregnancy. Patients should use it only if its potential benefits outweigh the potential risk to the fetus.

Patients should not use PEXOLA 0.25mg tablets during breastfeeding. However, if patients cannot avoid its use, discontinue breastfeeding.

Effects on driving and use of machines

PEXOLA 0.25mg tablets can have significant effects on the ability to drive and use machines.

Hallucinations or drowsiness may occur.

Patients who use PEXOLA 0.25mg tablets with tired and sleepy episodes should avoid cautionary activities. Be warned that there is a risk of severe injury or death to himself or others due to impaired eye.

The following adverse reactions are expected during PEXOLA 0.25mg tablets use;

Get more products and services from DMRC KENYA right here. For a more interactive platform, be sure to find us on Facebook by clicking right here.

We are a Kenyan-owned online Pharmacy and Diabetes Care Center built from a patient-perspective. We are a licensed Online Pharmacy operating from Nairobi and delivering medical supplies countrywide.